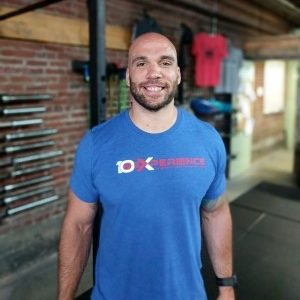 A former multi-sport athlete (basketball, football, and track) who fell in love with Olympic Weightlifting. So much so that he placed fourth in the Snatch at the 2015 American Open. Started CrossFit after gaining almost 70lbs and pushing 300lbs total weight with a sedentary lifestyle. After watching the movie “300”, he began to learn more about Mark Twight and eventually lead to him finding CrossFit. From there, he decided to devour as much knowledge as he could in respect to fitness. Justin received his first CF L1 Certification in 2008 and is currently down 70lbs from his highest weight.

The following year, Justin was hit with a personal tragedy. He lost both his best friend and uncle to cancer, in the same week. At that moment, he realized life was too short and decided, with best friend, Galen, to follow their dreams of opening their own CrossFit gym and has never looked back. To this day, it’s the best decision he’s ever made.